Her latest achievement was against four very good players, all past Internationals. Pat beat A Jacobs 21 – 17 in the first round, T B Broderick 21 – 16 in the second round, B Bellamy 21 – 17 in the semi final and C Crafer 21 – 14 to win the final and be crowned National Champion.

This year Pat also played for Sussex who were runners up in the Atherley Trophy National Championships.

Everyone at EDIBC send many congratulations to Pat for her latest achievement. 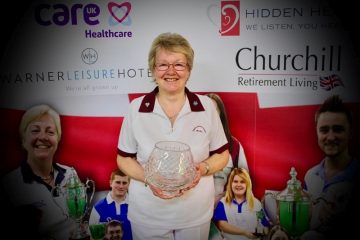