Congratulations to our Juniors 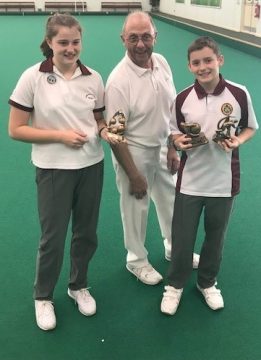 Sophie & Freddie Cable both played in the finals of the Sussex Junior County Finals at Horsham I.B.C, 8th March.

Both of them improved on last year’s results. In the singles Sophie won 1, drew 1 and lost 1 whilst Freddie won all his 3 games, in the skills Sophie scored 25 points and Freddie scored 45 points.

In the previous 2 season’s Freddie has won the singles once and the skills once, both times coming out overall champion but this year he took ALL 3, Singles, Skills and Overall Champion, a great performance.

I’m very proud to be their coach and to see that the work they have put in paid off, this is great for our club.

Freddie will now go on to represent Sussex in the Area Finals at Horsham I. B. C. on the 19th April.

Congratulations to both Sophie and Freddie for what they have achieved so far and good luck to Freddie in the Area Finals in April.