I’m sure your aware by now that the club will shut its doors after the last session of bowls on Wednesday 4th November and hopefully reopen on 3rd December, subject to Government approval.

Rest assured we will be planning for reopening with a full agenda for the Christmas period including a couple of Mixed Drives and internal matches. Meanwhile detailed below is what will happen with booked rinks , leagues etc.

The last league matches will be tonight and when they resume they will restart as shown on the schedule . Outstanding games from the period when we were closed will be played at the end of the schedule. i.e. If we resume on Thursday 3rd December, that will be the team you are already scheduled to play.

Will stop from Wednesday 9.30pm and start again on the schedule under the correct week.

Will continue for an extended period when we re-open.

19/20 finals will still take place, being played at the beginning of January. The date is to be confirmed. This year’s club competitions will still go ahead from January. If you would like to enter any competition please email us and you will be entered. To remind you, the competitions are Singles, Novice singles, Pair’s, Mixed Pairs, Australian Pairs. If you are an individual player and would like to pair up, please us know and we will try and find you a partner.

We will keep you updated on any changes, meanwhile please keep safe, follow Government guidelines and keep your fingers crossed that the rest of the Country follow suit and then we can all get back to bowling again.

Welcome to the new season and a brief intro to how we hope the new season will run. This year, the only internal Club competitions will be Singles and Pairs initially, with Triples and possibly Fours being introduced if the Covid situation allows. Last year’s competitions are still active, aiming for a Finals Weekend on November 7th/8th. However, the Bowls Committee have decided that the new national Rule of 6 means that the 2 Fours competitions, Mens and Mixed will both have to be cancelled totally.

As well as the regular Leagues, the Ladder League and the weekly roll-ups, players are encouraged to enter a variety of competitive knockout formats played over the whole season and culminating in the Finals Weekend in April 2021. Last year, over 200 players entered one or more of the Competitions.

There will be 10 competitions starting in November, 4 Singles and 6 Pairs. An Entry form is attached to this email, with further copies on demand. There is a closing date in early November so the early rounds can get under way soon after. There will be an entry fee of £3 per person for each competition and one person will be asked to be responsible in each pair for communication. As well as a handsome Cup or Trophy, (as currently displayed in the Restaurant), there will be prize money for both winning and losing Finalists.

The Singles matches are played as first to score 21 shots. Each player has four bowls, and an independent Marker needs to be arranged to keep score and do any necessary measuring. The Men’s and Women’s Championship are open to all full members. The Novice competitions are for all members in their first 3 years of playing indoors, but only if they have not won any Competition or other recognised award, either at Eastbourne or any other club either indoor or outdoor. The Mixed singles has not proved popular and is dropped.

Pairs matches are played over 21 ends, with four bowls for each player. The Leads play all their four bowls before the skips. In the event of the scores being equal when all ends have been played, an extra end or ends will be played until a decision is reached. There are 5 competitions, Men’s, Women’s, and Mixed, and 2 Senior competitions where both players must be aged 65 or more. We are also introducing a new Australian pairs competition, with a weekly Australian League to be introduced later in the year.

Due to Covid-19 guidelines and to allow us to clean between sessions the bowling times will be slightly different this season. The following sessions are available.

I look forward to seeing you all back soon,

The Presidents 5s Fun Day saw 60 bowlers of all abilities come together in a friendly competition with each team playing singles, pairs triples and fours. The event was sponsored by Focus Investment Planning Ltd who kindly donated prize money for the 1st and 2nd place teams.

This was the first ever President’s Day and a first for the 5’s format.

Everyone enjoyed a day of bowling, mixing with friends and the rivalry of competition. The eventual winners were ‘Hit and Hope’ with ‘Jim’s Joker’s’ a very close 2nd. The winning players very generously donated their prize money to our Captain’s Charity, Children With Cancer Fund – Polegate which is a much respected local charity who support families of children who are under going treatment for cancer.

Thank you to everyone who made the day such a great success, the President’s Day will now be an annual event. 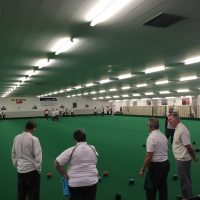 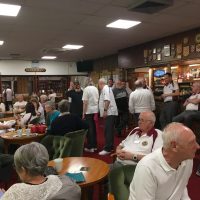 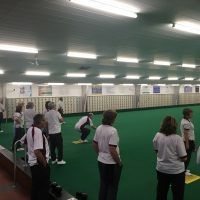 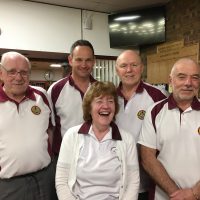 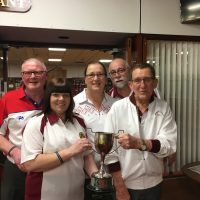 I am really looking forward to our first President’s 5’s Fun Day on Sunday 23rd February, we have filled all the spaces for the teams, thank you to all of you who are coming along.

The format of the day is Singles, Pairs, Triples and Fours.

If you aren’t playing please come down to watch and support the club and your fellow bowlers, the draws for the matches have taken place and there is bound to be some great games to watch throughout the day.

Don’t forget we will also be showing the England vs Ireland 6 Nation’s rugby match kicking off at 3pm.

See you all on Sunday,

Fund raising efforts for our Junior Academy have reached an amazing £380 these monies being raised from the sale of used sets of bowls, sale of plants and marmalade at our open days and fayre’s and £145 donated by Waitrose who included our club in a token drop as part of their community matters scheme during October 2019.

This has enabled our Junior Coach, Dave Buttle, to purchase two new much needed sets of junior coaching bowls.

Congratulations to Dave and our junior players in their success this season in the Sussex County matches.

If you would like to join our Junior Academy or require more information about our junior academy please send us a message using our Contact Form.

Congratulations to Freddie and Sophie who both played for Sussex U25’s on Sunday 12th January against Surrey.

It was Sophie’s 1st game for the league team and she played well, Sophie was in the same rink as Freddie, their rink won 25 / 16 and Sussex won on all rinks.

Sussex have now won the Inter County League with 2 games to play, Freddie has played in every league game this season and they are both playing in the next league game away to Essex.

Message from their team manager

“Just thought I’d let you know that both Freddie and Sophie played for Sussex on Sunday against Surrey.
Freddie has this year established himself as part of the main team.
Sophie played her 1st league game, getting herself a county shirt.
Keep doing what you are doing Dave, as it is helping the Sussex youth program.”

Festive fun at the club with 48 Bowling members taking part in the Xmas Drive.

All 12 teams had festive names and dressed in mufti.

Thank you Ralph for organising it.

Don’t forget there will be another Mixed Drive on New Years Day 2pm. 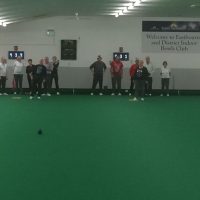 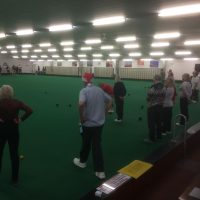 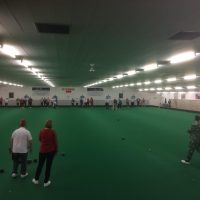 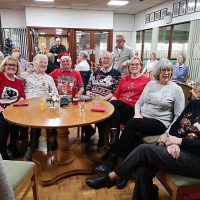 The county leagues under 25’s are doing very well in the Inter County League, sitting top of the table. Played 5 and won all 5. Freddie has played in all 5 games and has been picked to play for the County in the National Under 25’s double rink, this is the first time one of our juniors have been picked to play in this competition. What is very pleasing is that the top players have been asking the Manager for Freddie to be picked for their team.

Eastbourne tried some different players and positions this time to try and reverse the Denny Cup result, but they found it just as difficult to master the very fast green at Grattons.

The away rinks skipped by Mike Taylor and Phil Garrett found the Grattons rinks very hard to find line and weight going down by 26 shots.

The club now needs to concentrate on the Sussex league and maintain our position in Division 1.