A huge thank you to all our fantastic members for their support and donations throughout the weekend and also to those bowlers from other clubs, Falaise, Langney, Egerton, Denton, Preston and outdoor clubs from Hailsham and Hellingly who also took part.

The Mayor of Eastbourne, Councillor Pat Rodohan opened the event and had a bowl as did his wife The Mayoress, Eastbourne’s MP Caroline Ansell came along to support the event and we also had representatives from SCIBA, SCWIBA, Disability Bowls England and of course CWCF (Children With Cancer Fund – Polegate) the local charity that we were raising funds for.

Over the 24 hours Terry Prior and Peter Ring bowled 148 ends with a total score of 255 points. With the help of members that joined them on rink 1 a total of 2,664 bowls were bowled and they covered 4,884 meters (5342 yards, 3.035 miles) each! On all the other rinks a staggering 6,402 bowls were bowled in a variety of games including a session of Aussie Pairs, general roll-ups and the nightshift (some in their pyjamas) decided to have an obstacle course to keep them awake.

The total raised over the 24 hour period including our ‘Just Giving’ page was the phenomenal amount of £4,600

For those of you who don’t know our club has been supporting CWCF since September 2018 and had raised a total of £6,304 before ‘Lockdown’ in March 2020.

After ‘Lockdown’ was eased late in 2021 we continued to run events such as Mixed Drives, our Presidents 5’s tournament, a Beatles Night and various raffles to raise funds for CWCF culminating in the 24hr Bowl-a-thon and the total raised from all these events is £5,935 which means so far we have raised a grand total of £12,239 for this very worthy charity. 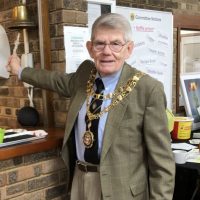 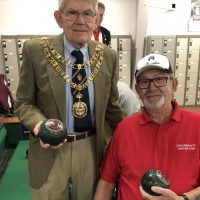 Eastbourne Mayor with Terry Prior 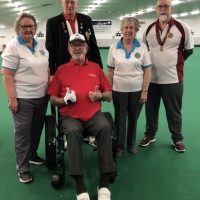 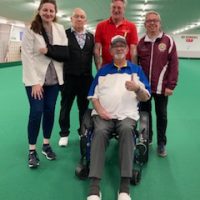 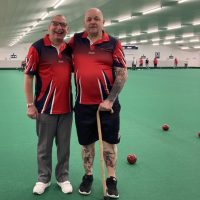 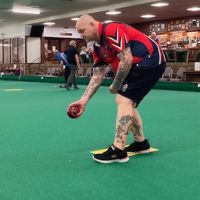 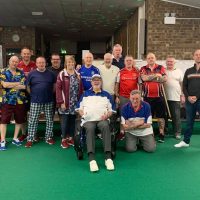 Last Sunday 27th March 2022 Terry, Peter and Derek appeared on the Sylvie Blackmore Show to give feedback on how well our 24hr Bowl-a-Thon went and announce how much it has raised so far for the Children With Cancer Fund – Polegate.

It’s well worth a listen, if you missed it the link to it is

The timeline should be at 3.40 to start listening.

The Management Committee are pleased to be able to welcome Joshua and Tristan to our bowls club to enable them to carry out their 300 hour work placement, during which time they will have an opportunity to learn every aspect of managing a sports club and we look forward to being able to offer advice and information that will enable them to complete their second year. We expect them to be committed to the hours they must complete and to take every task or project seriously and we also look forward to teaching them the game and introducing them to our members. 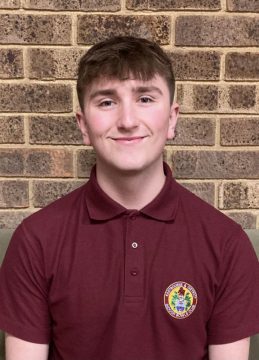 “Hello, my name is Josh, and I am a keen cricket player who loves fast bowling. I have thoroughly enjoyed learning a very different kind of bowling and I am looking forward to improving and learning more. I am originally from Wiltshire and chose to go to Brighton University to be closer to the coast, which was a brilliant decision. I am interested in all aspects of running a sports club and I hope that my time with EDIBA will help me to finalise where I would like to take my career once I finish university. I have loved my time here so far and I look forward to meeting you all over the coming weeks.” 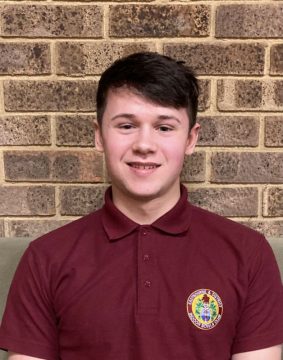 “My name is Tristan, I am 19 years old and in my 2nd year at the University of Brighton on the Eastbourne campus. I enjoy most sports and am always excited to try something new. I played football until I was 16 but my passion turned to golf when I began buying and selling 2nd hand golf clubs. My time spent selling on eBay has progressed my love for business and helped me understand some of the financial aspects. I look forward to the challenge of taking on the various roles at the club and am keen to offer my services and ideas. I’m looking forward to meeting and talking to everyone so if you see me around the club, please come and introduce yourself!”

A total of 60 bowlers in 12 teams of 5 spent a very enjoyable day on Sunday (27/2/22), battling against each other to finish top of the standings and win the President’s Cup.

At the end of the day the top team was CHAS’S TEAM, pipping President Phil Garrett’s own team to the trophy. TEAM RIDOUT won the much-coveted prize of the Mars Bars!!

President Phil congratulated the winners and thanked everyone for their support – from the bowlers themselves, to the kitchen and bar staff who kept everyone fed and watered ( a couple of dozen or so stayed on to enjoy Michelle’s Roast Beef supper), and special thanks went to George Brown for organising and running the competition itself.

But the biggest winner of the day was of course the Children with Cancer Fund, who benefited to the tune of approximately £360, made up from book sales, a game of ‘higher-or-lower’, and rink fees. 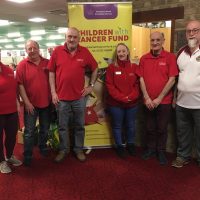 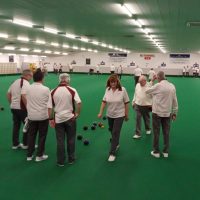 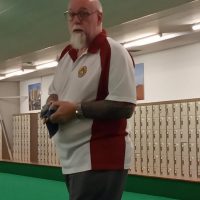 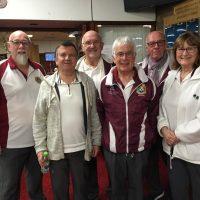 Despite the restrictions we have had to live with this year our club is thriving,

The club has progressed to the later stages of both the men’s (Denny) and women’s (Yetton & Mason) National Team Competitions, the next rounds of the Denny and Yetton are on 8th January at 10am and the Mason is on 21st January at 10am.

Club competitions are well underway, the club leagues are running smoothly and our Ladder League is very popular and currently has 92 players split into 23 groups of 4.

We continue to support the local charity Children With Cancer Fund – Polegate by collecting old printer cartridges and in December we ran a festive mixed drive and raised £372.

Our social calendar has been busy with members enjoying a Race Night, Live Music from Tom Powell, 3 Quiz Nights and a very successful Christmas Fayre.

We look forward to some great bowling in 2022, good luck to everyone in all competitions and for all our members, full or social look out for Fish and Chip Bingo Night, a Barn Dance, an Afternoon Tea, another Race Night, a couple more Quizzes and a Spring Fayre all subject to any Covid Restrictions that may be in place at the time of each event.

Happy New Year to all our members, their families and friends and to any prospective members, if you’d like more information about our club please send us a message using our Contact Form and we will be in touch to arrange a visit and/or a taster session. 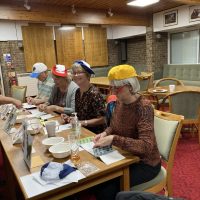 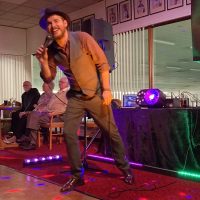 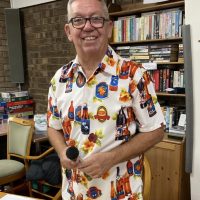 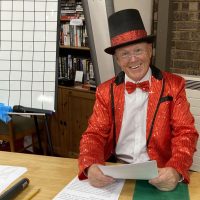 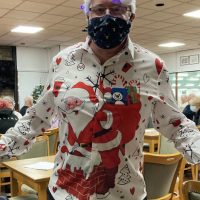 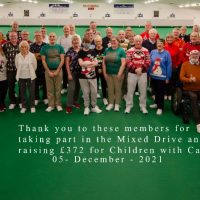 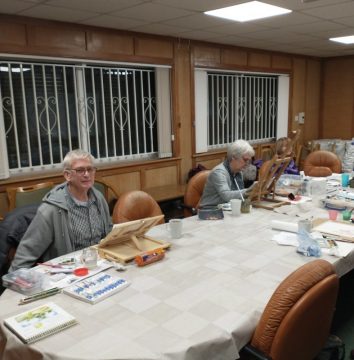 Tuesday 30th November 2021 saw the launch of a new art group using our club facilities. The inaugural meeting launched with five participants and the room/table will accommodate another 6 or 7 people so if you fancy a dabble give Naomi our centre manager a call 01323 506009 and she will pass your details on to the group. 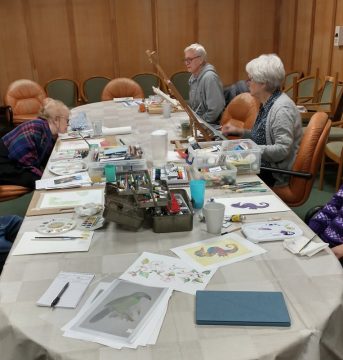 We are going to hold a mixed drive on Sunday 5th December 1.30 onwards to raise money for the children with cancer fund.

For those of you that do not know what a mixed drive is… It is a fun afternoon for all abilities playing in teams of 4. There are 3 games of 6 ends each. The afternoon is a great way to meet new people and have some fun playing bowls. You can join up individually as teams are drawn.

There will be prizes!

For the entry fee we are asking for a donation (minimum £3) with all the monies going to the Children with Cancer fund.

To make it a bit of fun, come along in your Christmas attire!

I would like to thank everyone who has bought the second hand bowls, equipment and clothes over the last few months. We have raised £1,000 for the juniors, Dave Buttle has now ordered 3 more sets of bowls for them to use on a Friday 4-6pm Juniors session.

Eleanor started her placement with the club to support her course work in all aspects of sports management. Although she couldn’t compete her planned hours due to Covid, she worked alongside all the directors, staff and members to gain knowledge that would help her complete her final year.

We are thrilled to tell you that she attained a First Class Degree and recently applied for employment with the Commonwealth Games, where she has been appointed as ‘Assistant Sport Competition Manager for Lawn and Para Lawn Bowls’ She will be involved in running the bowls event in Birmingham 2022. 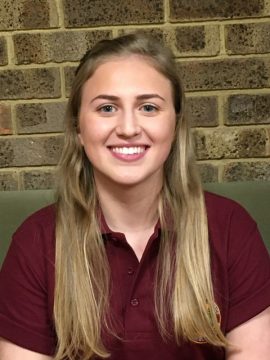 ‘My job title is going to be Assistant Sport Competition Manager for Lawn & Para Lawn Bowls, so myself and my manager will be running the bowls event at Birmingham 2022.

I really cannot thank you and all of the members enough – it may have been just shy of two weeks for my placement but it really had a huge impact on me which I will be forever grateful for.

We wish her much success, what an amazing start to her career. 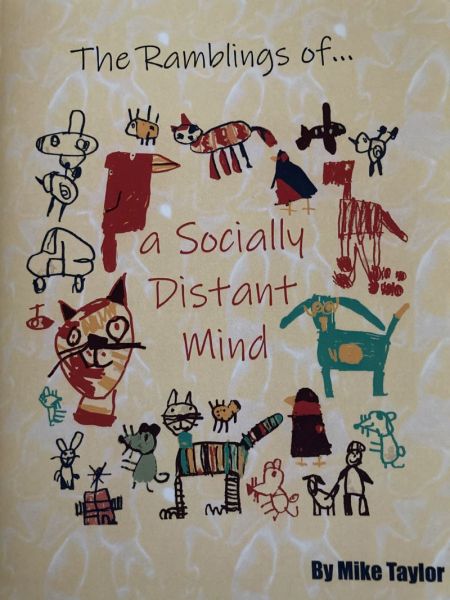 During the first lockdown our Men’s Vice Captain, Mike Taylor, started writing poems as a way of passing the time and grew to become an (almost) daily Facebook post to share with his online ‘friends’, the subject matter covers social distancing, restricted travel and most importantly praise for the work undertaken by the many people who selflessly worked on in very demanding circumstances.

At his own expense Mike has had a booklet containing his first 25 poems professionally designed and printed and has so far raised a total of £300 which has been donated to two charities, JPK Project which was formed to provide opportunities for people with learning difficulties and People Matter which provides free information, advice and guidance to local jobseekers, whether or not they are currently working, Mike is a volunteer at this charity.

JPK Project is the chosen charity for the Eastbourne Open Bowls Tournament which Mike runs, the booklet is £5 and can be ordered online via the tournament website https://www.eobt.club or you can contact Mike direct on 07702 244855 or by email email hidden; JavaScript is required

All proceeds going to these two charities, JPK Project and People Matter

Well done Mike, they are a great read.